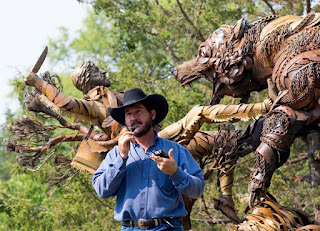 The inaugural Hugh Glass Rendezvous and sculpture unveiling went off with out a hitch.  It was one of the hottest days of the year but history was made that day.  The life-size sculpture of Hugh Glass being mauled by a Grizzly sow was unveiled in conjunction with the program held inside the Hugh Glass park just feet away from the Rendezvous camp site. 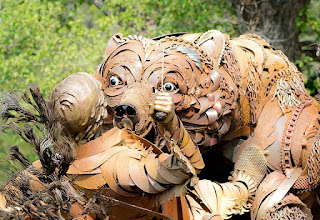 In 1823, the real Hugh Glass—a seasoned frontiersman, fur
trapper, and scout—signed up for an expedition up the Missouri River.
During this trip, at a point near present-day Lemmon, South Dakota, Glass
surprised a grizzly bear and her two cubs. The grizzly attacked him before
he could position his rifle, so Glass fought for his life using only a knife and
his bare hands. By the time the bear was killed, Glass was terribly mauled
and mangled. Among Glass’s group, Jim Bridger and John Fitzgerald where
elected to stay behind and care for Glass—or, seemingly inevitably, to bury
him when he succumbed to his injuries. However, fearing their own
exposure as the distance grew between themselves and their initial party,
or even an attack by nearby indigenous groups, Bridger and Fitzgerald
made a difficult decision. They collected Glass’s gun, knife, and other
accoutrements, and left him for dead near the banks of the Grand River.
Against all odds, Glass did not die. His 200-mile trek back to
civilization was recounted far and wide among other frontiersmen, and
Native American tribes told tales about his brave journey. Everyone
who lives along the Grand River has heard of Hugh Glass, and he was a
favorite character for us kids when we fancied ourselves as frontiersmen.
However, when I was creating a sculpture about this iconic story, my
first focus was on the grizzly. The grizzly had caught Glass off guard, and I
played the encounter in my mind, seeing their relative positions, and how
se would have forced him back. But mostly, I imagined the look of power
and determination on the animal’s face as she protected her cubs, and I
wondered how I could get the scrap metal to capture that. I decided to
focus on the eyes, which I formed from sheet metal to be more convex
than they would have been in life. To soften the look a bit, I tucked in some
tire chains to represent the fur, and a trusty fork here and there. South Dakota sculptor John Lopez stands next to his latest creation
of Hugh Glass being mauled by a Grizzly Bear.


With the new release of the film "The Revenant" starring Leonardo DiCaprio as Hugh Glass and directed by Alejandro Gonzalez Iñárritu,"Oscar Winner for Best Director of Bird Man, 2015" it is time to start a new sculpture. I have started work on a monument featuring Hugh Glass a 19th century fur trapper who was mauled by a grizzly bear and left for dead. The mauling took place 25 miles south of where my studio is located near the small town of Lemmon, SD 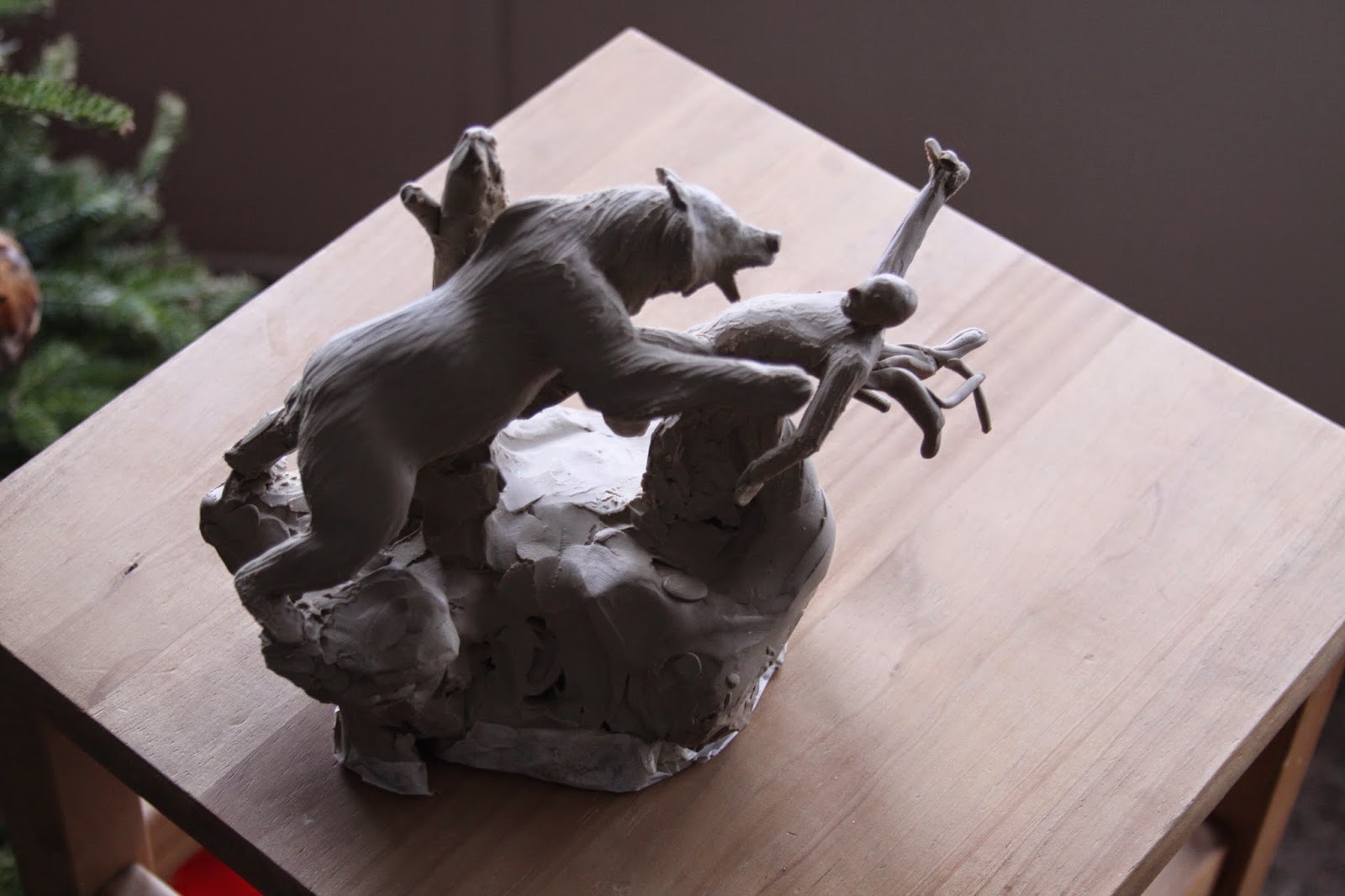 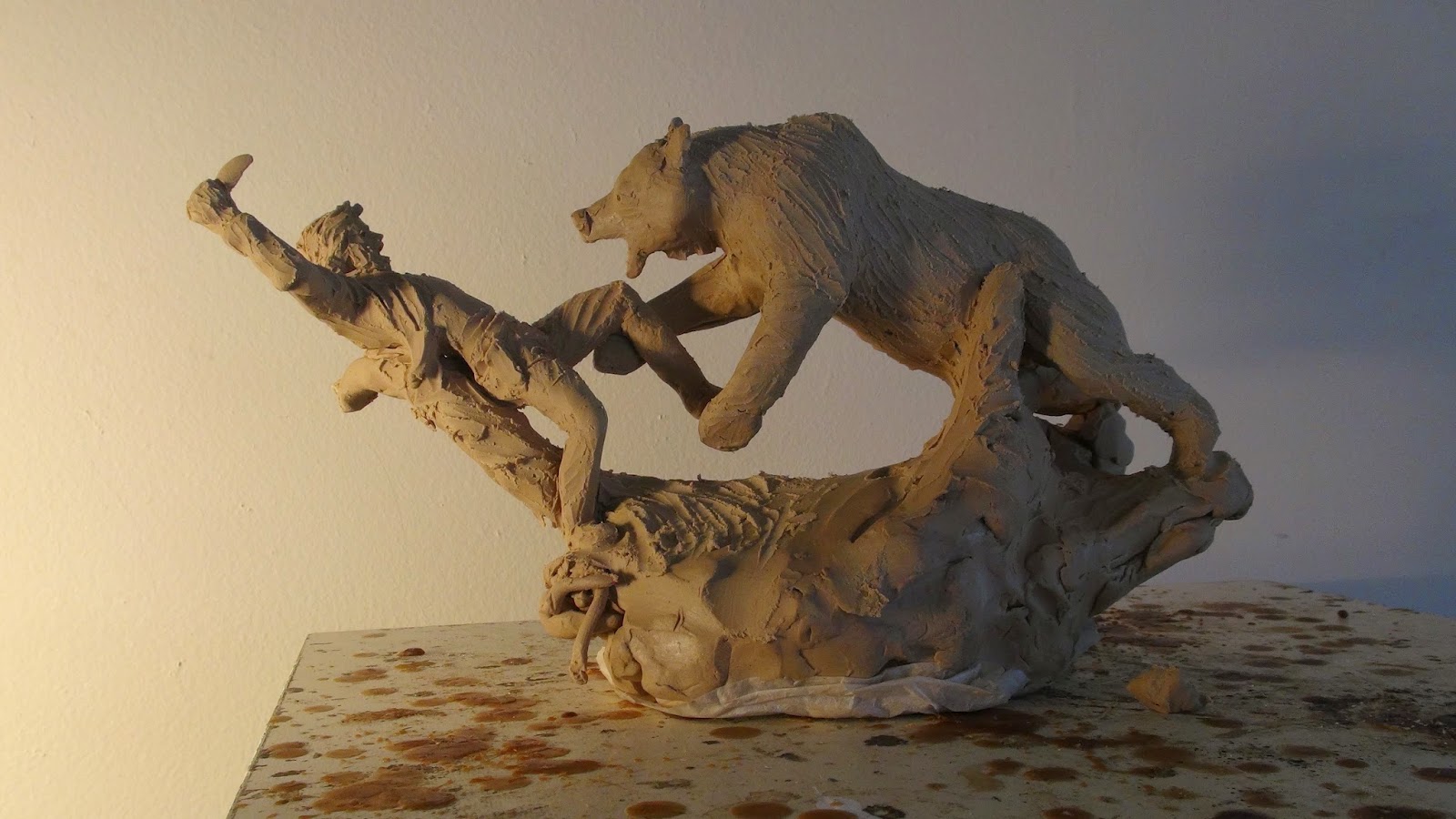 Here is a clay maquette of the monument I am in the process of building.


Here are a couple of links to read more about the movie. 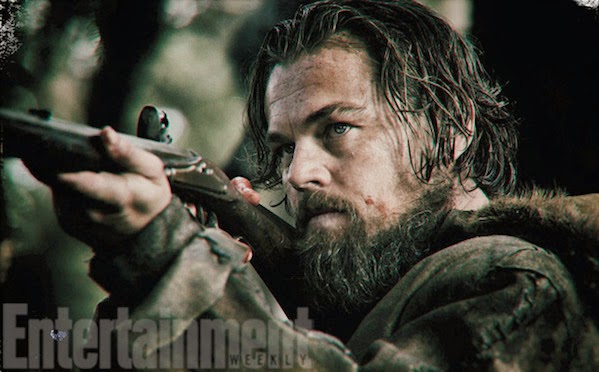 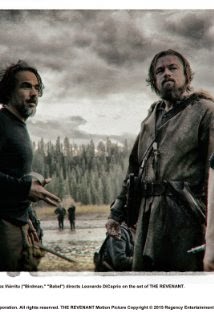 To learn more about Lemmon, South Dakota and some things you can do while visiting the area click here.
http://www.lemmonsd.com/

Click here to order your copy of John's new book. 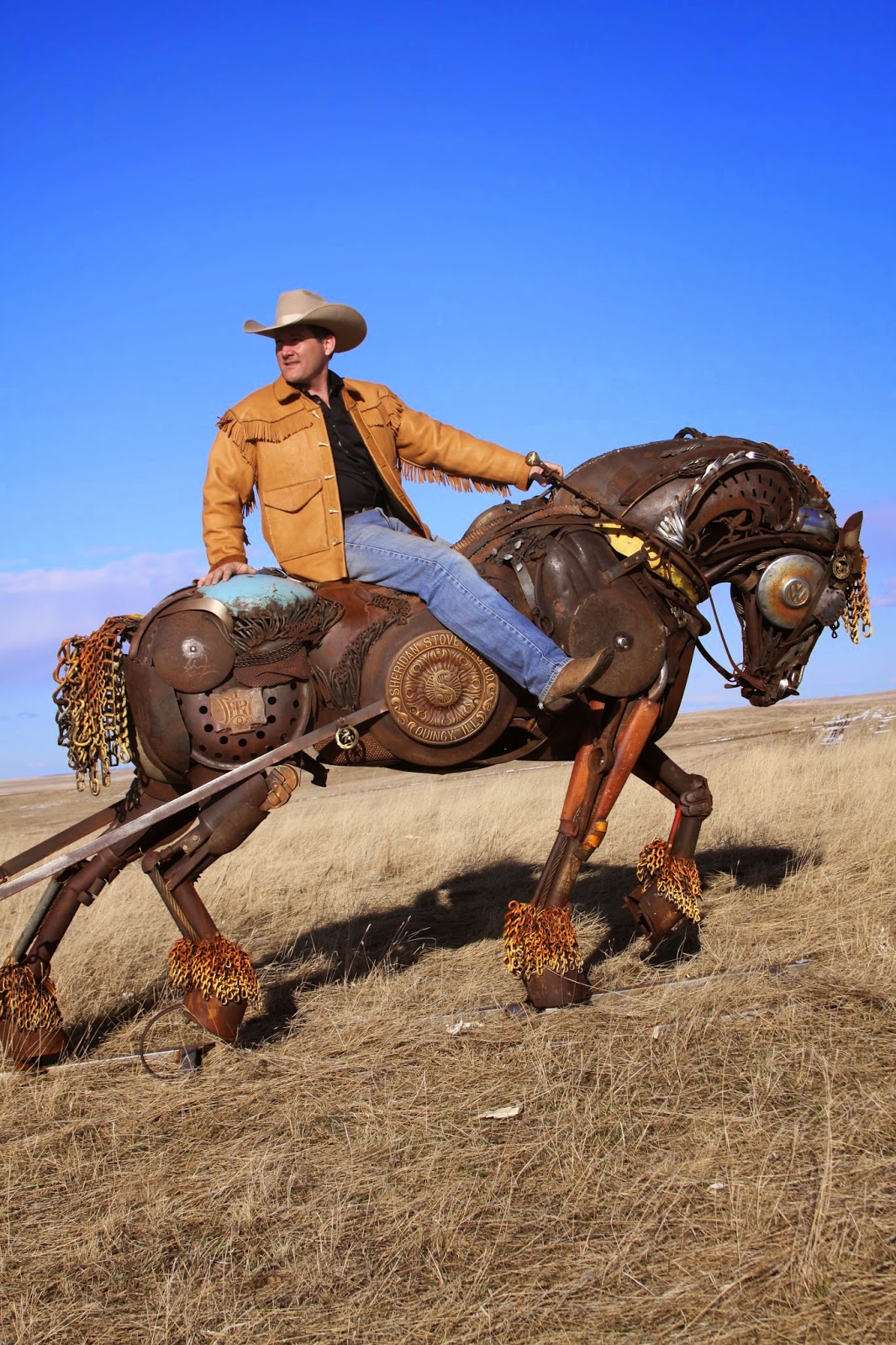 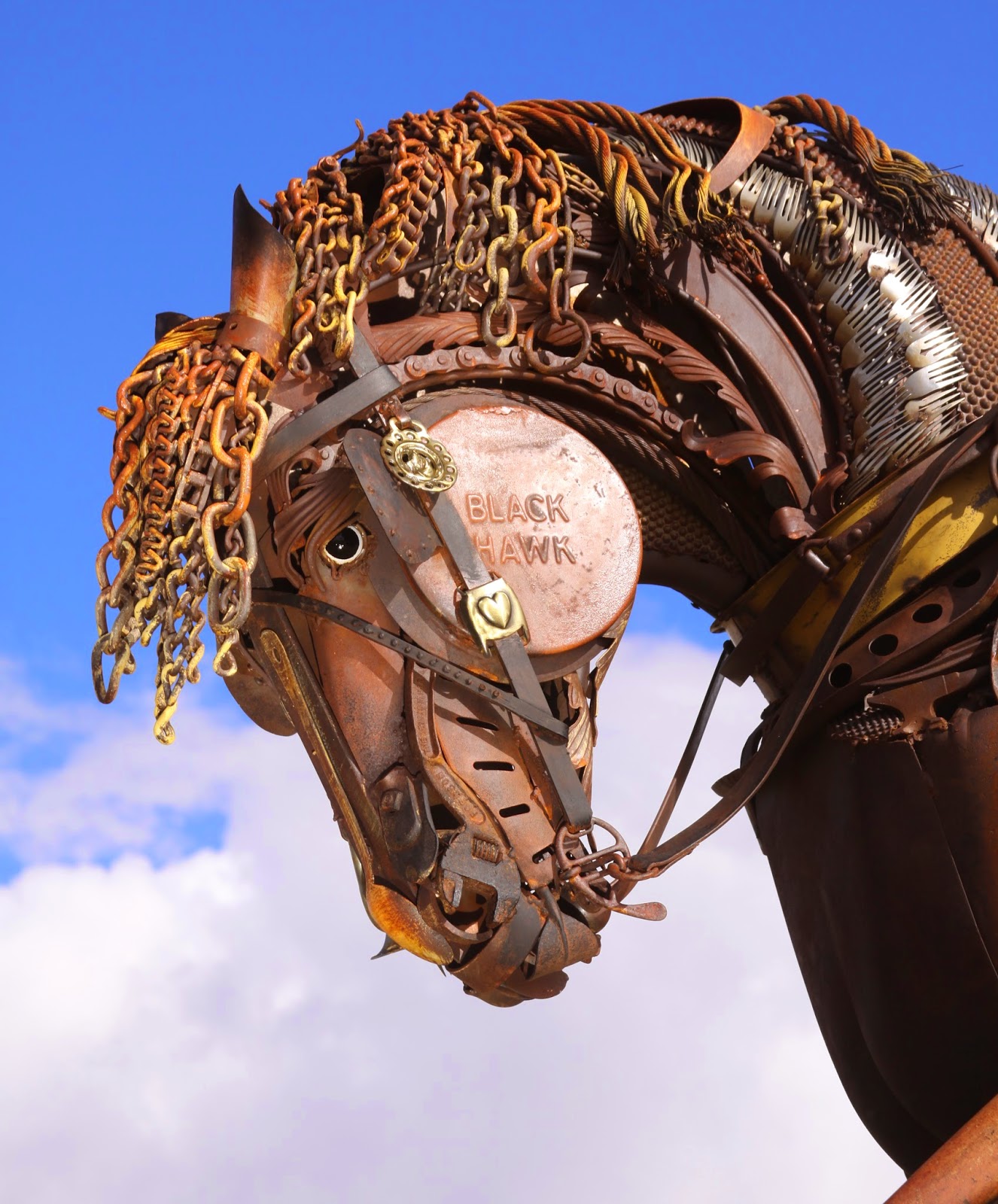 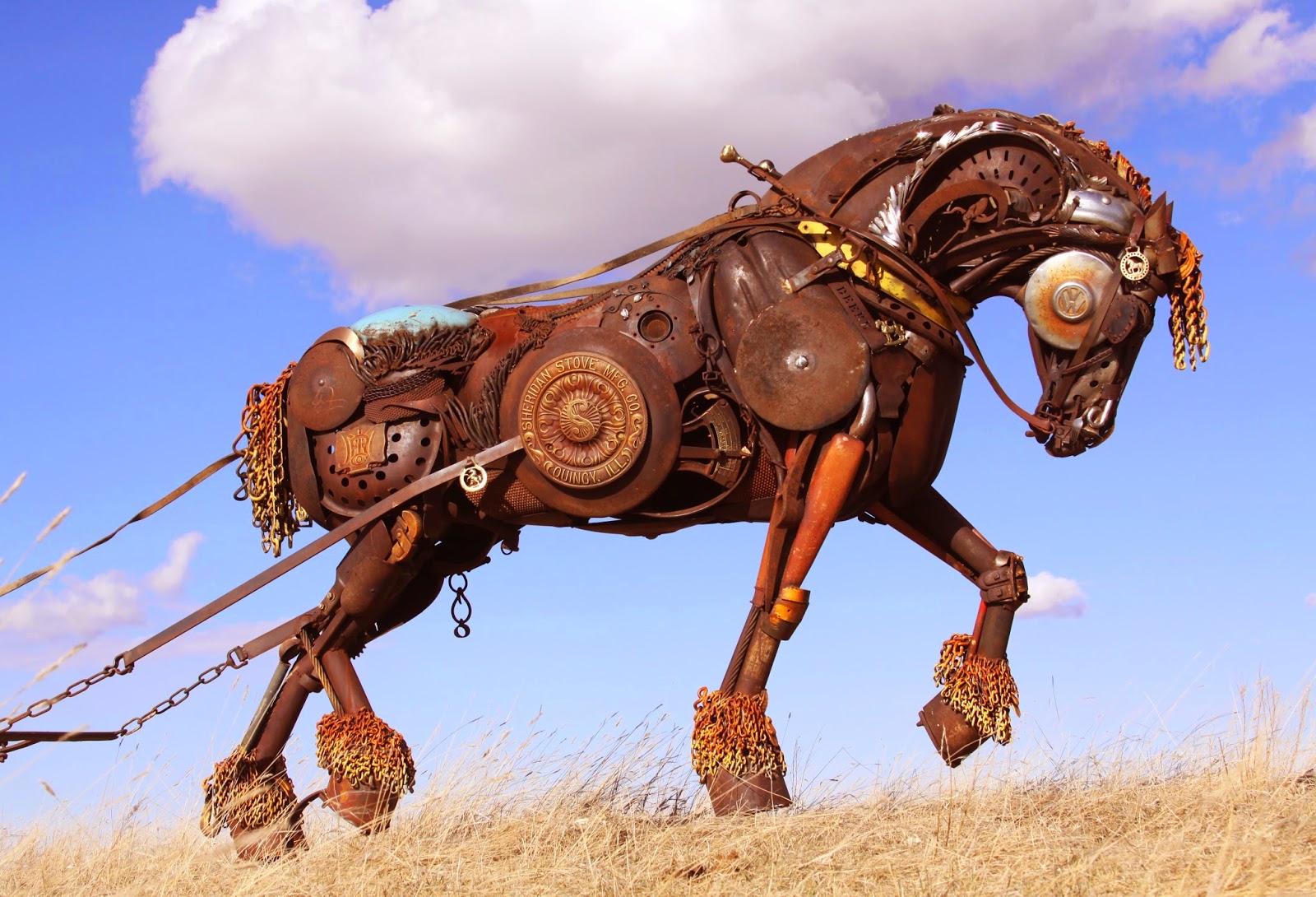 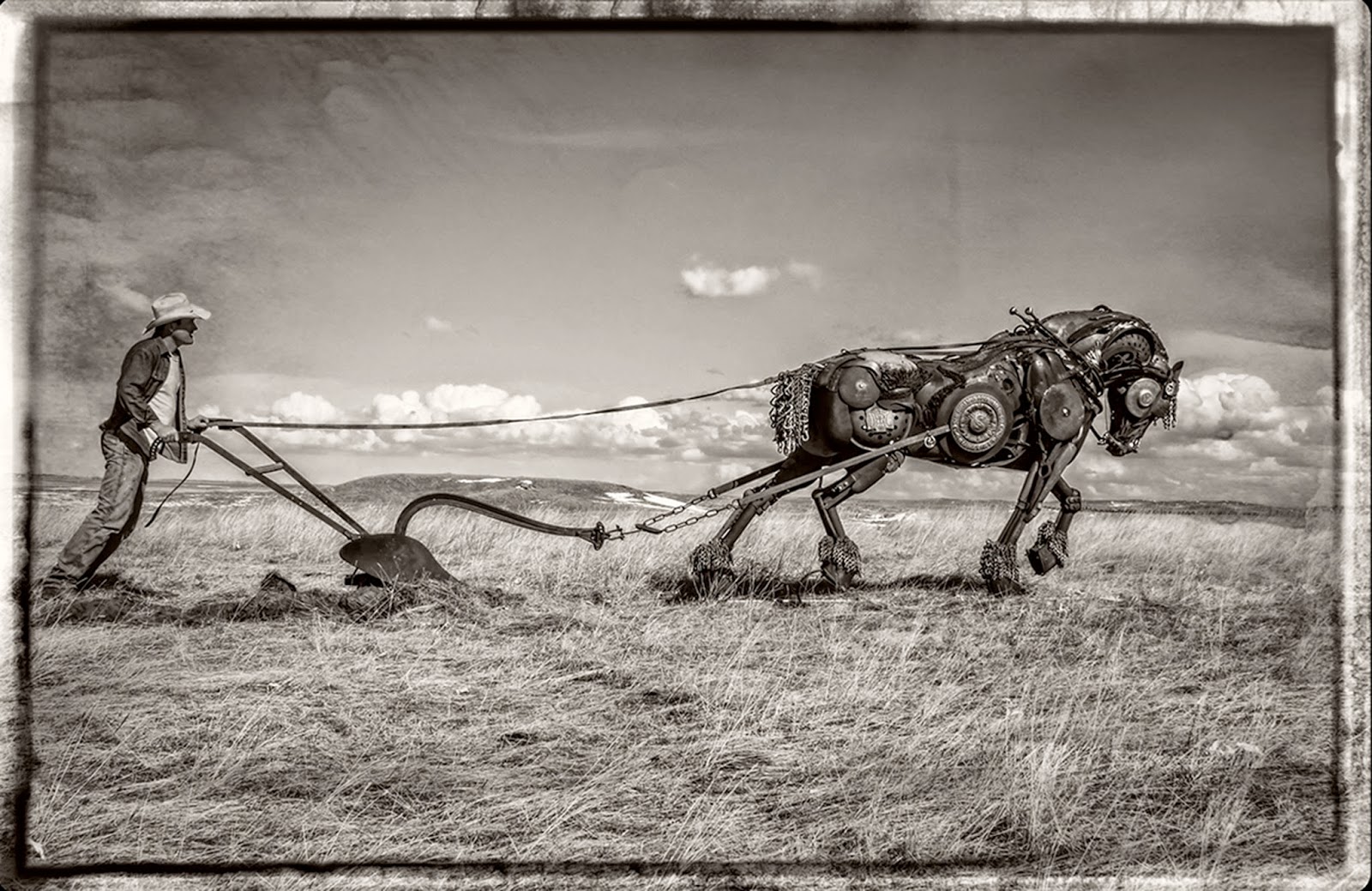 Sculptor John Lopez behind a single bottom plow being pulled by "Black Hawk". 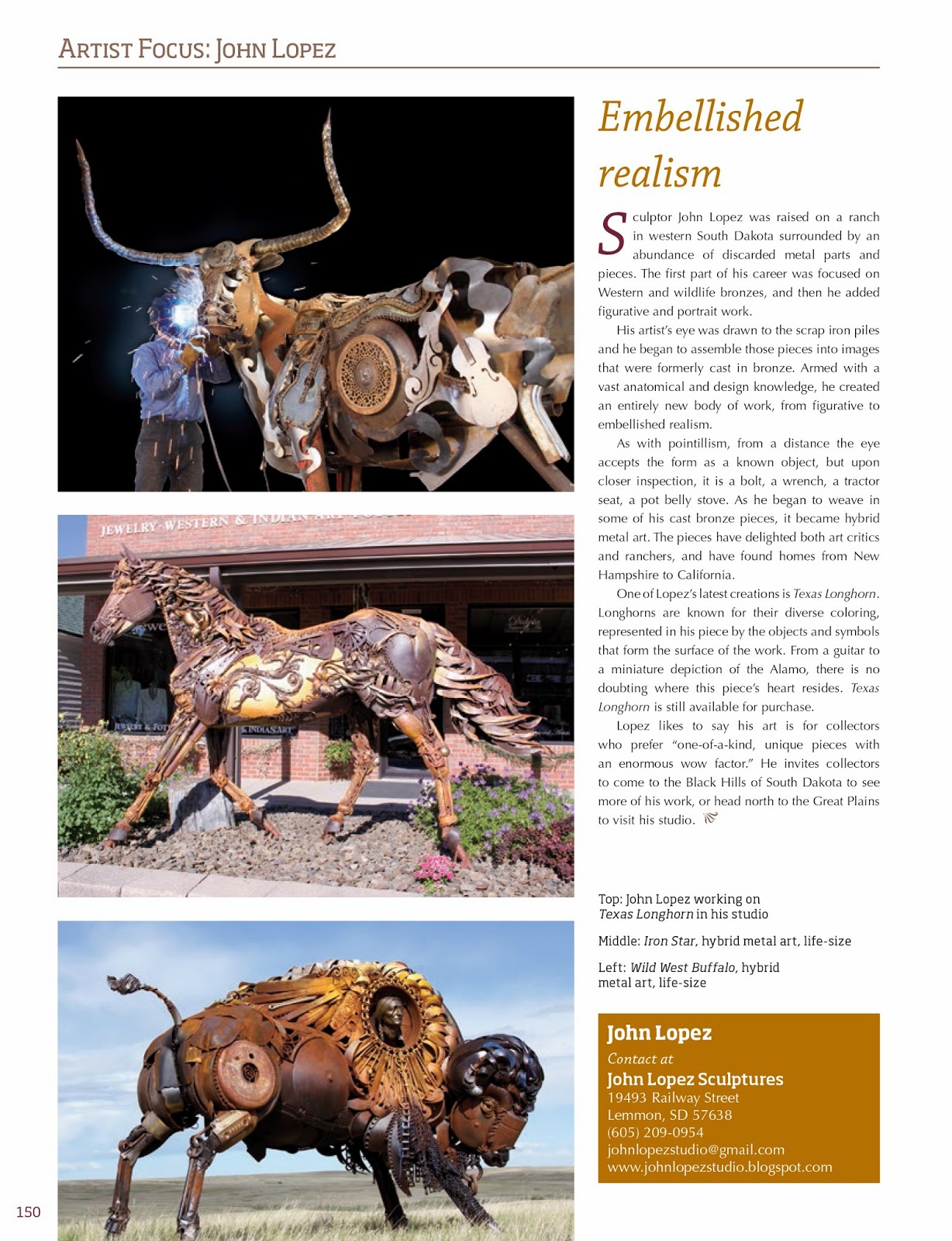 Click this link to see John's official web site.   http://www.johnlopezstudio.com/
Posted by John at 6:00 AM No comments: 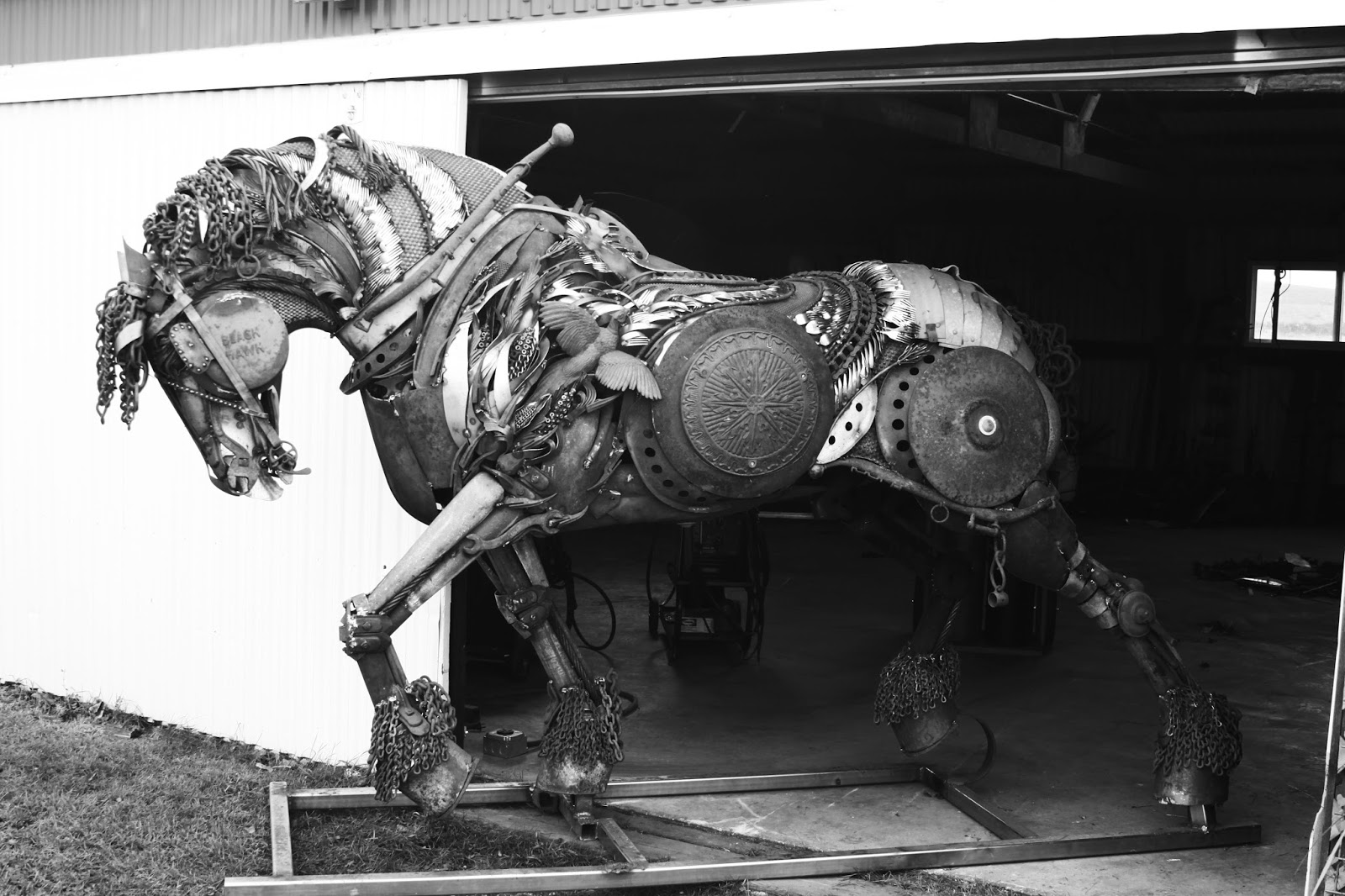 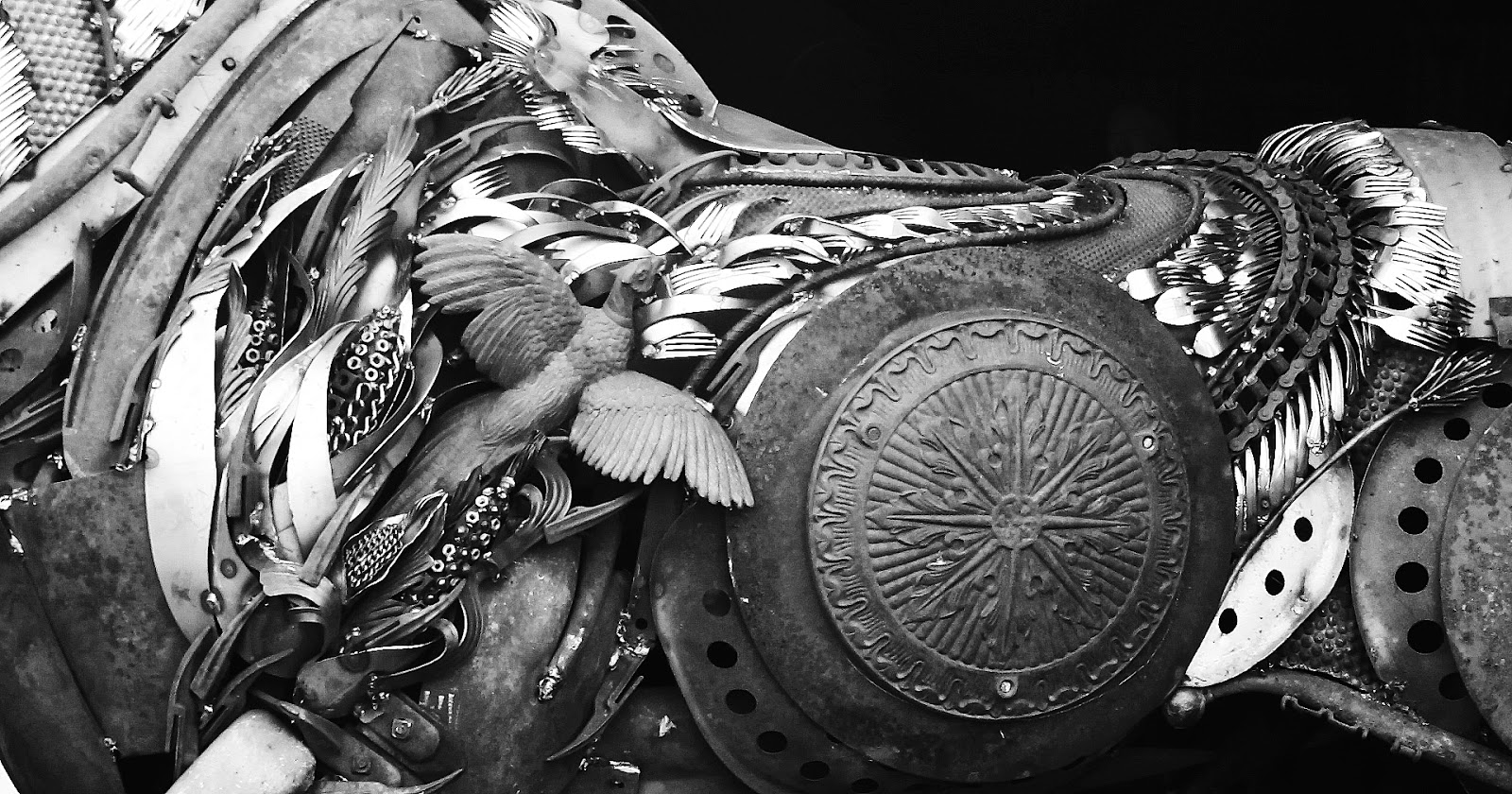 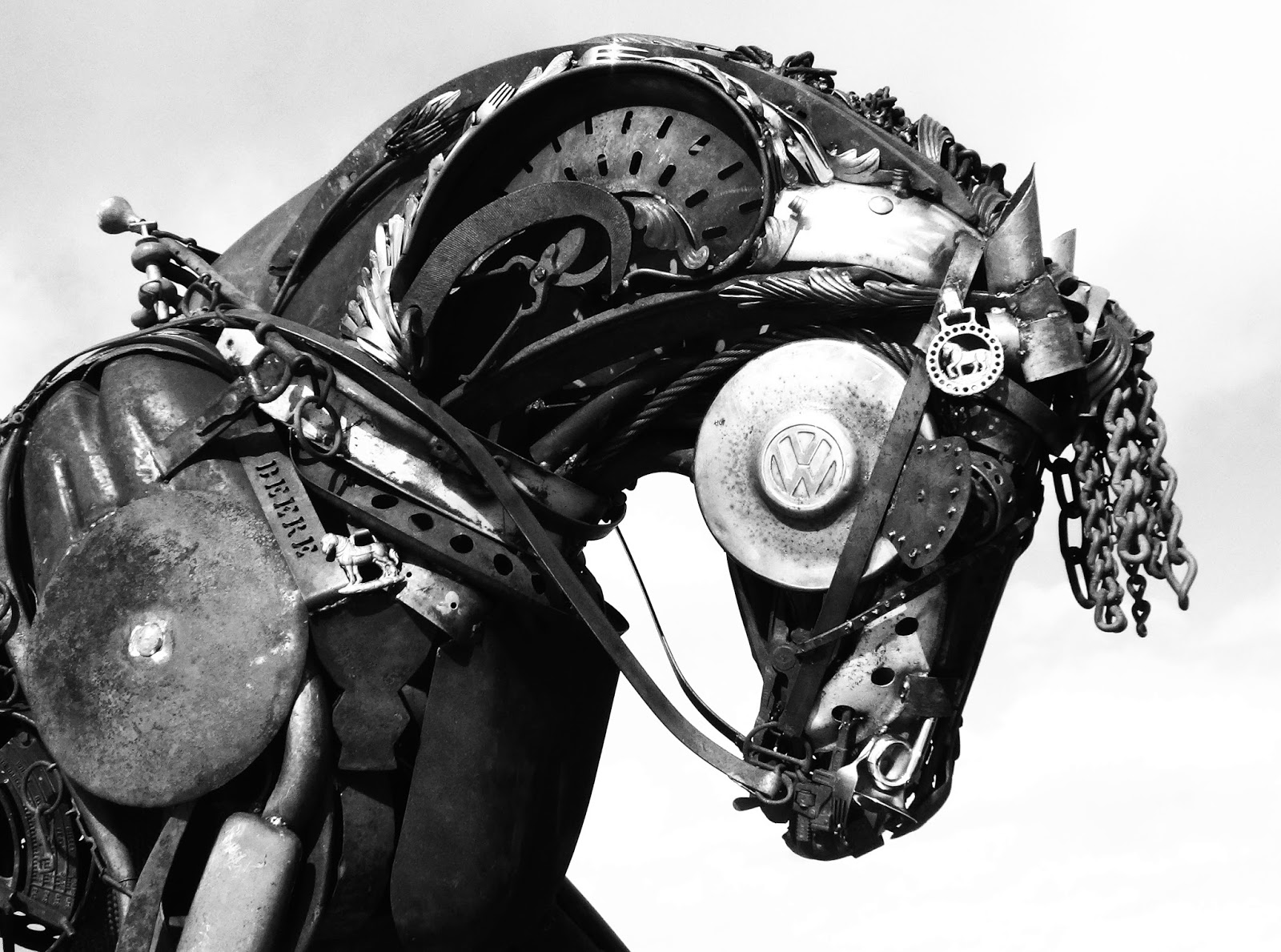 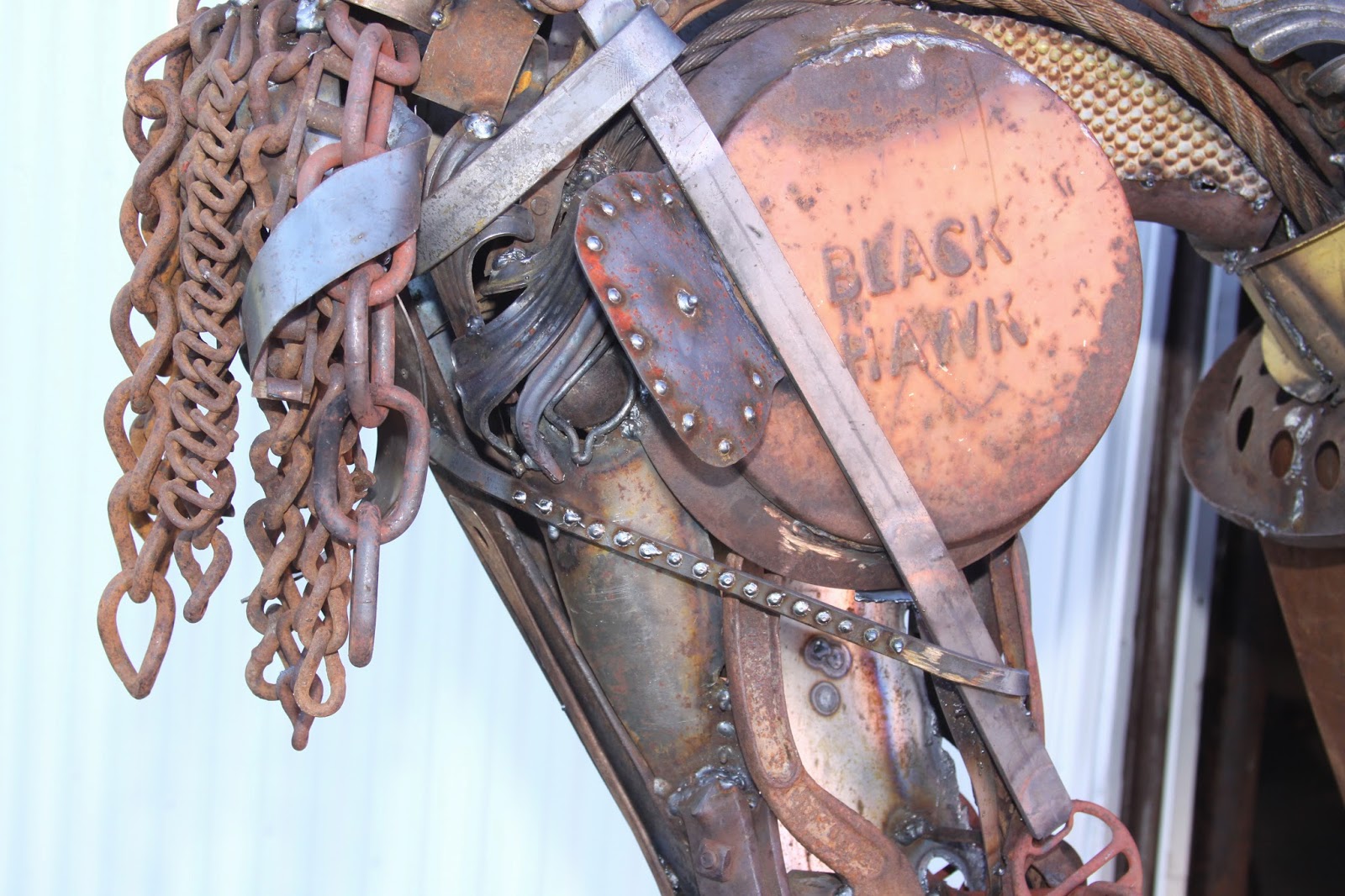 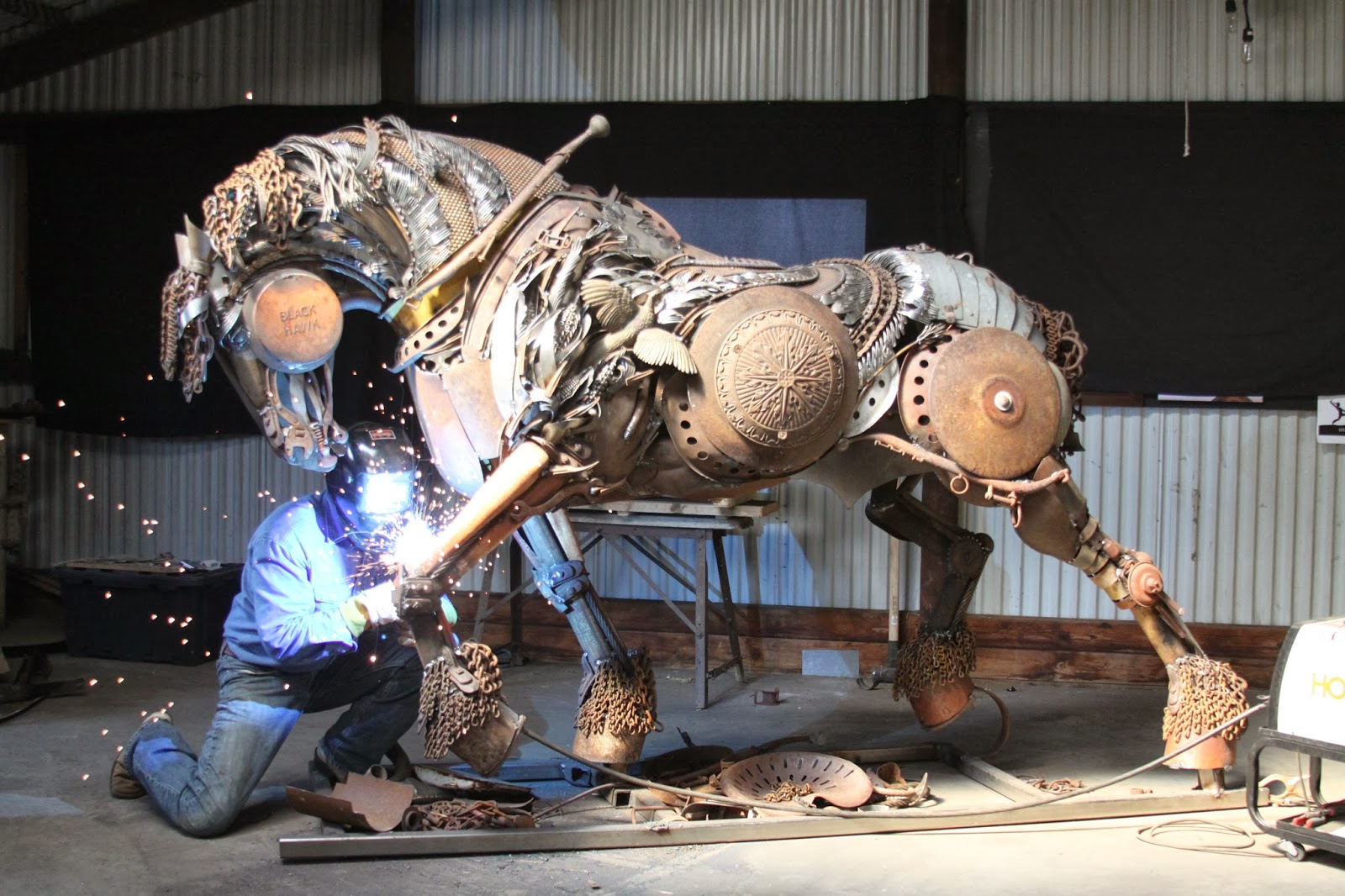 Welding on Black Hawk in my shop east of Lemmon, SD.
This life-size draft horse will be installed in-front of a farmers market in Kenstington, New Hampshire. 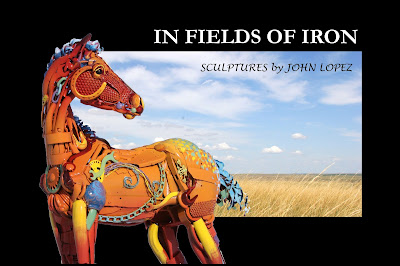 John really does live in a field of iron.  Iron from machines used to work crops.  Iron that homesteaders left behind when new equipment and technologies took over. " I live in a time where scrap iron is the fruit on the plains," John says.   "I appreciate the wonderful donations from family and friends.  i love that people want to help me and be a part of what I am doing"

This soft cover book introduces the world to Hybrid Metal Art and the artist that creates it.     26 of John Lopez's sculptures are pictured in the book, it sells for $28.00 shipping and handling included.
Click the button below to order yours today.
">
Posted by John at 12:36 PM 2 comments: 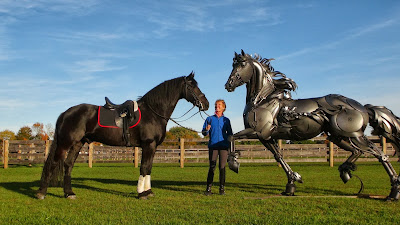 Historic Runnymede Farms in New Hampshire is now the home of a larger than life-size Friesian sculpture by John Lopez Studio. Danial and his trainer Judy are pictured to the left of the scrap iron sculpture that was commissioned by one of the owners of the historic farm that is now being restored.  To see progress shots of this one-of-a-kind sculpture in the welding shop scroll back to the top of this page and click on BUILDING A FRIESIAN. 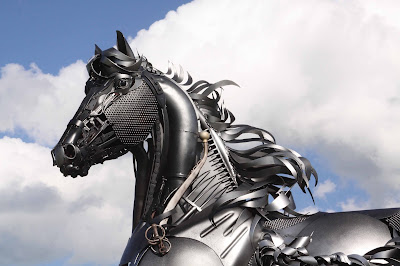 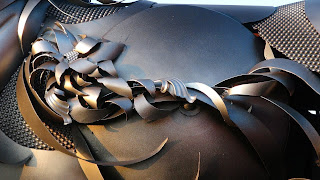 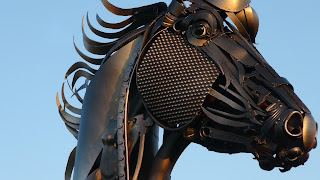 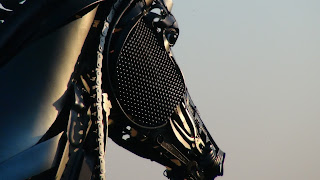 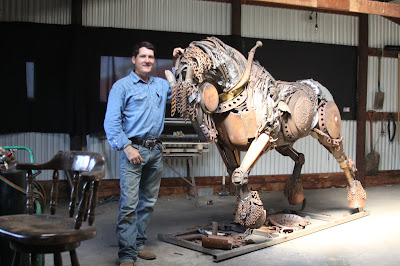 Sculptor John Lopez is pictured here next to a piece in the shop.
To see more progress shots of this piece click on the
title above labeled "Sculpting a Draft Horse". 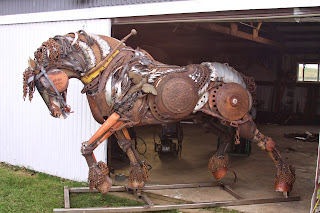